Background -The SilkSphere foundation was created in 2009 to complement the launch of the first Temtpu kit for consumers. The product came exclusively in Airpod format, i.e. a pre-filled capsule that would attach to a proprietary airbrush and that could be used until empty without any need for maintenance, giving the customers all the advantages of airbrush makeup without any of the perceived drawbacks, such as tools maintenance and cleaning. The formula was had a very dewy finish and was engineered to be user friendly, so it would remain very malleable after application in order to allow the home user to easily fix any mistakes. It had a very distinctive floral scent, which was problematic for some, including myself, but was already remarkable for its unprecedented coverage and for the fact that it was an all-in-one product, not needing any primer, concealer or color corrector.  SilkSphere was reformulated in 2015 to coincide with the launch of  what is now the very popular battery operated, palm top device Temptu Air. The shade range was slightly revised and the floral scent significantly diminished, but it remained available only in Airpod format, which meant that you would not be able to use it with a traditional airbrush.

New Release -This year after some wait, no doubt due in large part to the market difficulties created by the global pandemic, Temptu was finally able to update the formula once again and to release it at long last in bottle format, allowing everybody to experience it regardless of their preferred tools.

Range and Formula -The new SilkSphere is available again in 18 proprietary shades that will match any skin tone, with a good color consistency when compared to the previous version. Many of the colors have a very neutral undertone to reduce the need to mix tones, as they were initially created for the Airpod cartridges which did not allow for direct mixing, and this makes using them very easy. Having said that, there are now hues with a decidedly warm or cool undertone as well, so you can achieve any amount of precision needed in your color matching. The finish of the formula is still dewy, however this should not scare anyone who is used to matte foundation, because ultimately the amount of glow will depend on each individual complexion, and because any perceived shine can be easily mattified with the lightest pass of any fine HD powder (such as Temptu's own Invisible Difference). The new SilkSphere feels finer than its previous versions, but still retains its high coverage and its all-in-one characteristic, needing no priming, no concealing and no color correcting in most cases. Probably for this very reason, the formula's texture is a little more obvious than that of thinner airbrush foundations, but it still feels lighter than traditional products and looks perfect on its first passes, achieving a finish that would require quite a lot more work and skill to match using a traditional product.
In the video tutorial below I am showing you a step by step total look achieved using SilkSphere in bottle form for foundation and the Perfect Canvas range in AirPod for everything else.

Silksphere vs other Temptu Formulas -Compared to the other Temptu foundations, Silksphere ranks second to Perfect Canvas for shade selection, first in dewiness and first in viscosity, being the "thickest" of the three, but the difference with SB in this respect is barely perceptible. Lastly, but no less importantly for some, the floral scent is now completely gone, making the product application pleasantly scent free. As for the format, the choice is now up to you. The Airpod capsules allow for perfect dispensation every time, and while decidedly more expensive, the pod system means that you will achieve an optimal result using far less product. The bottle format price is significantly lower, and allows you to use this product with any tool and to mix the shades freely. Temptu's 1/4 oz /7.5 ml starter kits, available for this line in pack of six colors each, mean that everybody can experience this formula with a very reasonable investment.

My Opinion -As for my personal, unsponsored opinion, I have been a huge fan and advocate of this product for years, and I could not be happier and more grateful for this new reboot. I especially like to use this formula on problematic skin, where I have never needed to color correct or conceal thanks to SilkSphere's exceptional coverage. The extraordinary luminosity of this formula makes it a truly transformative makeup, and the only one that actually does conceal fine lines and rough texture. Because of this its silicone component, I would personally not recommend  the daily use of this product on very acneic, irritation-prone skin, but for special occasions there is no other product that will allow you to achieve the same wow factor in as little time and with as little effort, so much so that I like to call SilkSphere "model skin in a bottle". 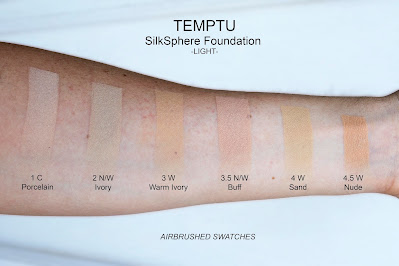 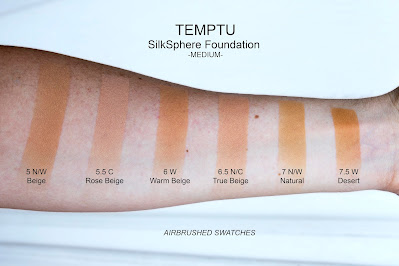 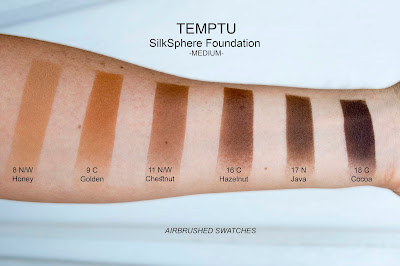 Posted by The Airbrush Makeup Guru at 8:10 AM No comments: